With more than 20 years experience, we are proud to offer yoga teachers with internationally certified yoga methods which are inspired by the most lucid and enjoyable styles. Teachers who daily share our passion for Yoga.

Our School, founded in 1997, with a non-stop voyage of evolution and compromise with teaching, is supported and certified by Yoga Alliance in its programmes of 200hs and advanced 500hs.

The Institute is directed by Javier Castro, experimented yoga teacher E-RYT 500hs by Yoga Alliance, and the teachersâ€™ team of Yogashala Institute, trained in excellence and inspired by traditions such as Anusara, Iyengar, Ashtanga and Kundalini, with a fresh touch of Vinyasa Flow.

Pure oxygen located in the heart of Marbella and surrounded by beautiful gardens. It is the perfect place for enjoying a quiet atmosphere full of pure peace. A big shala with ample windows and ecological wooden floor provide the shala with an optimal temperature: warm in winter and fresh in summer. Swallows enjoy yoga evenings dancing with us amongst the rose buds of our delicious inner garden. Yoga Shala Marbella is a place for personal growth where to learn and practice the millenary art of Yoga.

Our general Yoga classes are taught by well experienced teachers! Teachers trained to offer the maximum care at an excellent level. Each class is designed to work in a balanced way strength and tone and increase flexibility with time. The classes incorporate elements for strength work-up, sequences of movements to benefit the cardio vascular system with postures to recover flexibility, conscience in breathing and a holistic attention to the shape. All classes include relaxation at the end of the practice. 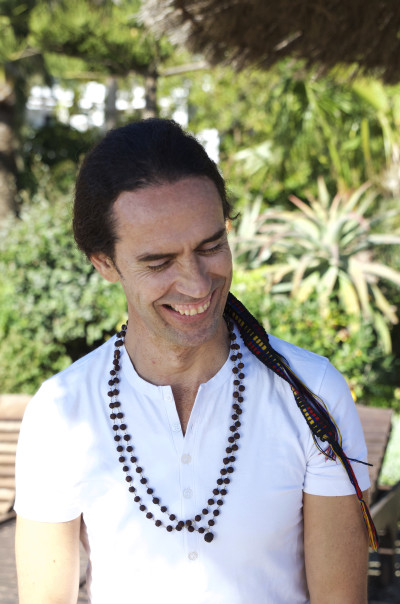 With delicate technical accuracy and a great sense of humour, each practice with Javier Castro is a unique opportunity to discover your sacred nature and to celebrate life through your body. Javier never stops, he is continuously studying and is a true example of evolutionary yoga. Perfect syntax of classic and contemporary yogas, Javier’s classes gather the qualities of rigour and technical depth, mixing freshness and fun of practising with the authentic flavour of the inner quest of the Yogas of Meditation.

His training methods include:

“I am very curious, I love investigating; the space in a class is the perfect place to take a step forward into the mystery of life. When I prepare to teach, I dedicate my heart and my mind with the upmost delicacy and excellence, and I realize that everything I know is to help, support and empower the student and for that, and before we get on the mat, there is always an alignment to allow the Universe to guide and inspire us, so that the time of the class becomes a sacred space where to flow in reverence and dedication.” â€“ Javier.

Biography of Javier Castro: “The path is under your feet”.

Javier found Yoga as a path 25 years ago and he has followed it tirelessly and with complete dedication ever since.

At a very young age he was granted a study scholarship in the monastery Ashram of the Siddha Yoga tradition and spent 4 years in India studying meditation, Philosophy of Vedanta & Kashmere Shaivism and Hatha Yoga under the guidance of his Guru Gurumayi Chidvilasananda and the great scholar teachers of this deep mystical tradition.

He studied Ashtanga Vinyasa in Mysore, India with Sri Patthabhi Jois and he has been teaching Ashtanga Yoga since.

Javier is an experienced intensive & progressive Asthtanga & Vinyasa teacher, inspired by Anusara and Iyengar Yoga traditions. He has been teaching for the last 23 years of his life.

Registered in the Spanish Association of Yoga Iyengar, and since 2002 participating in the national Conventions of this reputed method.

Sivananda teacher since 1986, he studied Yoga with the reputed French teacher Sylvie Bignon.

All inclusive, his teachings are now exploring the new System of Yoga Sridaiva, created by Desy Springer & John Friend.

He also studied other traditions like Zen Meditation and Toltecan Nagualism under the guidance of his teacher mariv de Teresa, and met Carlos Castaneda early in 1994. His interest in cross cultural studies includes the mystics of Christian castile and the Sufis of Al-Andalus.

Zen Shiatsu Therapist since 1995 and Kinesiologist since 2012.

He is the founder and Director of Yogashala Institute in Marbella, Spain, which he opened in 1997.

What other teachers say about Javier Castro

His teachings, creativity, sense of humour, devotion and exceptional technical and spiritual knowledge of Yoga are truly impressive. I am forever grateful to him for introducing me to Kashmere Shaivism teachings and realize my full potential as a Yoga teacher. His attentiveness to each student, great persistence in his personal development as well as development of his students brings forth a lot of creativity and discipline in his teachings as well as his life as a teacher.

Javier’s charismatic nature, strong commitment to the yoga path and community building have resulted in his current Teachers’ Training Course that I would highly recommend. His analytical nature, depth of knowledge and his natural curiosity makes this course unique.

He also uses his bilingual abilities to translate important yoga concepts into Spanish and or English.

Dedicated practitioner and true seeker, I have seen him in several stages of his development, practicing regularly, not missing a day from his chanting, meditation, yoga asanas, pranayama, as well as karma Yoga.

Javi never stops – he is continually changing and he is a true example of Yoga evolution. I have witnessed his devotional bakhti and karma yoga work in the Siddha Yoga Ashrama in India, as well as his disciplined vigorous practice in Mysore Shala of Ashtanga Yoga.

His yoga path is all-inclusive, where he shows respect and tolerance for different limbs of Yoga, different styles and teachings.

On the personal level, his kindness is rare – helping friends and strangers alike and having tremendous compassion for all living beings.

He also offers international work-shops and retreats and develops Teachers’ Training programmes, his energetic and compassionate being having inspired and supported hundreds of people on their Yoga path, committed to share the yoga alchemy with all beings that want to make a difference- starting by themselves.

I came from an intellectual world, psychologist and psychoanalyst, and at that time I would have never imagined the shift that my life was going to undergo.

In 2000 changes began and it was through the Californian massage, Shiatsu and psycho-corporal work ( System Rio Abierto of which I made three years training), meditation and Reiki that I started to study these subjects that inspired me so much.

At the end of 2004 I left Buenos Aires and started a voyage, a flow through Brazil, Spain, Thailand, India.working and training in different styles of massage and therapies (Thai Massage, Tibetan Massage, Ayurvedic, Cranium-Sacral, among others)

And at that time of personal change process (2007), I met Yoga, during a long travel through India.

A simple asana sequence, always the same sequence, which I started to practice daily, and I felt its powerful effect.

In Marbella I discovered the Anusara Method which gave me a higher understanding of pure practice, while feeling a strong affinity with its base philosophy, and although I never gave up giving and teaching massage, my interest began to shift more towards Yoga as a way of life, and from there the happiness to share this path with others.

After two years I went back to India, this time to receive some specific training in Yoga. I graduated in SVYASA (Swami Vivekananda Yoga Anusandhana Samsthana) near Bangalore and attended various intensive courses in the BKS Iyengar style, at the Himalayan Iyengar School, in Goa.

From then onwards, I started to give private classes in Marbella, in Gyms and Spas. I continued going deeper in my knowledge at Yogashala Institute, where various of the styles I had been investigating and practising were included in their classes.

I also continued with immersions in the Anusara System and in 2013 I travelled to India again to attend an intensive course in the Iyengar style (with Usha in Rishikesh and the Chanchani in Deradhun).

In my classes, I like to incorporate different styles of Yoga depending on the needs of the students, using the fluidity of Vinyasa, the precision of Iyengar, the principles of Anusara and the use of elements for the Therapeutic classes.

I graduated as Yoga Teacher in Hatha & Vinyasa 200hs and as Hatha Vinyasa & Therapeutic Yoga Teacher 500hs at the Yogashala Institute certified by Yoga Alliance.